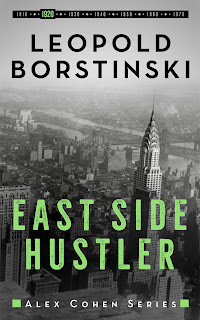 Alex is back from the Great War a broken man. His family think him dead and he is living on the streets like a hobo, haunted by the things he has seen and done during his time in Europe.

But after a chance meeting with a face from his past, Alex finds himself back in the arms of the Jewish criminal underworld of the Lower East Side, and back in the good graces of his former bosses - despite the unfortunate incident with his old friend, Sammy.

Alex is on the rise again and as America enters the Prohibition years, his life sees him in charge of booze running, with a little side-line in assassination courtesy of his war-time sniper training - that brings him into contact with some big names of the mob scene.

But with success comes danger. Can Alex really have it all in the dog-eat-dog world of the American gangster?

After reading Alex Cohen's first outing in The Bowery Slugger and being introduced to the story of New York's Jewish gangs last year, I was looking forward to meeting up with Alex again in East Side Hustler.

This second book, takes us right back to the criminal heart of the Lower East Side, where Alex is on his downers and trying to recover from his war-time experiences, without the support of his blood family, who believe that he died on the battlefield.

However, it is not long before we find Alex back in the bosom of his criminal "family". and this is where the fun starts - especially once Prohibition gets a grip on the liquor and gaming enterprises that have now become Alex's forte.

East Side Hustler takes us on a very different journey to The Bowery Slugger, although it is, in fact, a much more familiar gangster scenario this time around. The world that Leopold Borstinski describes in these pages has much less to do with the cultural make-up of the gangs involved, but is rather more of a text-book lesson in the booze running, speakeasy life and territory battles that went on during the Prohibition years. For the most part, this inevitably makes the action a bit cliched, and it is easy to see where things are headed, although there is a nice little twist of a nod towards Alex's past sins that I was not expecting. I should add that it is best not to get your hopes up for full-formed female characters here, but that is to be expected in this sort of book, where the female roles are primarily those of moll or mother.

What I found most enjoyable about this book is the way Leopold Borstinski manages to drop in some of the very big players of the mobster heyday, and I mean some very big names indeed. We are treated to meetings with the likes of Lucky Luciano, Bugsy Siegel, and even the dizzy heights of Alphonse Capone himself, which really made me smile (lots of the also-rans also make an appearance here, so I recommend some googling of names if you have not come across them before).

There is a lot to enjoy in this book, albeit with not many surprises plot-wise, and the male characters are a lot of fun. You can tell the author has worked really hard to create that authentic grown-up gangster noir feel here, and he has pulled it off with some savoir faire, so well done Mr Borstinski, I can tell you are warming to your subject.

I, for one, am looking forward to seeing where Alex's adventures take him next in his forthcoming outing, Midtown Huckster.

East Side Hustler is available to buy now on the following links:

Thank you to Leopold Borstinski and Sobriety Press for providing me with a copy of this book in return for an honest review, and to Damp Pebbles Tours for inviting me to be part of this blog tour.

Alex lived through the war, but will he survive the peace?

Jewish gang member, Alex comes back from the Great War almost destroyed by the horrors he has seen. When he is plucked from certain death by an old friend, he commits to making so much money he'll never know that agony again.

But the route to the top is fraught with danger and every time he helps one of his powerful friends like Al Capone, he acquires more enemies who want to see him dead. When organised crime financier, Arnold Rothstein dies, the turmoil caused by his loss sets in train a chain of events which means Alex must once more fight for his life. How far would you go to attain your American dream?

The second book in the Alex Cohen series is a violent historical novel, which tears through the Prohibition years of the Jewish New York mob. Leopold Borstinski's gripping crime noir pierces the heart of every reader like a bullet from Alex's sniper rifle. 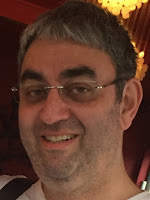 Leopold Borstinski is an independent author whose past careers have included financial journalism, business management of financial software companies, consulting and product sales and marketing, as well as teaching.

There is nothing he likes better so he does as much nothing as he possibly can. He has travelled extensively in Europe and the US and has visited Asia on several occasions. Leopold holds a Philosophy degree and tries not to drop it too often.

He lives near London and is married with one wife, one child and no pets.