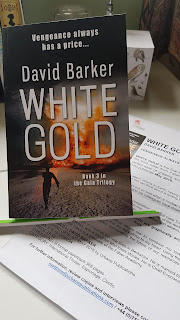 White Gold is the thrilling climax to the Gaia trilogy, following on from Blue Gold and Rose Gold.
This book carries on straight away from Sim Atkins' previous mission to save the World, on the Moon Base. Sim is consumed with the desire to avenge the death of his young son, but is finding it difficult to become part of the CIA investigation into the tragic events that took place on the Moon. Sim needs to be wily to get what he wants, and he uncovers some interesting leads to the identity of those responsible for the release of the Ebola virus on the Moon. How far will Sim go to get his vengeance, is he prepared to die to get to the truth?

Freda, Gopal and Rabten have managed to escape from the Russian prison, and are engaged in a cat and mouse road trip across the Asian countryside, followed by a mysterious assassin.

Meanwhile, Matthias Larssen and his Terror Formers are up to their old tricks. This time, their scheme is the most ambitious yet and involves the theft of a nuclear warhead, which they plan to use to initiate a massive volcanic explosion.

To complicate matters further, OFWAT have to uncover a mole within their own ranks, while fighting off the danger of being closed down, as the powers that be feel they are no longer needed. Can the team head off the most dangerous Terror Former's plot yet and save the World one more time?

Yet again, we have a fine rollicking ride of a thriller from David Barker, and an exciting climax to the Gaia Trilogy. This is totally un-putdownable.

There is plenty going on in this final installment and all our favourite agents have to pull their weight to succeed in their mission.

Expect bags of James Bond and Ethan Hunt type goings-on, with a bit of Star Wars and Minority Report thrown in for good measure.

I must confess to be feeling a little sad now I have reached the end of the road for Sim and Freda. I really hope you write some more adventures for them in the future, Mr Barker, as I have become very attached to them. I loved that Freda finally found love with someone who is able to banter with her about film and TV references too.

The Gaia Trilogy has been so much fun to read and it poses some interesting questions about geo-politcs. The fact that these books are set in the near future, brings a sense of realism to the problems the World is suffering from in these stories, and does make you wonder how far some people may go to bring about real change. I, for one, hope this does not involve blowing up a massive volcano!

I highly recommend these books for those of you that like your thrillers on the intelligent side, with lots of action, and good female characters too. More please, Mr Barker!
Posted by Brown Flopsy at 5:06 PM