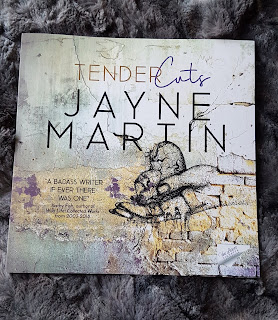 Tender Cuts is a collection of 38 powerful flash fiction tales about life and the wounds it inflicts upon ordinary people.

Stories as diverse as that of a child beauty queen; the heartbreak of the lonely; the grief of the bereaved; nagging voices from the grave; and even the story of the heart-throb lobster of the laundromat, each tale has a way of getting under your skin and making you question what it means to be human.

Tender Cuts is my first flash fiction collection and I have to admit that the power of these teeny-tiny tales has set me thinking.

These stories are certainly diverse in nature - from the sublime to the ridiculous -  but time and time again I found them getting to the heart of the human condition in a succinct and stirring way. It is absolutely fascinating how Jayne Martin manages to elicit such a visceral response, whilst using so few words each time.

When I reached the final page of this book, I had questions...so many questions...about flash fiction.

I have always thought of flash fiction as more of an exercise in writing, rather than an end. However, after reading Tender Cuts, I can now appreciate that it requires a considerable amount of skill to consistently capture the essence of a story in so few words - and that flash fiction can be an art in itself.

So, I was very keen to pick Jayne's brains after reading her book, and she was very kind to agree to answer a few burning questions for me, as part of my review of her book.

It is my pleasure to share Jayne's thoughts with you here:

What attracted you to writing flash fiction?...

Before coming to flash, I had written movies-for-television for twenty years, so the
writing of strong, powerful moments contained in short scenes was a natural for me.
Writing flash is like cooking a reduction sauce. You take away rather than add until you
have its essence. Emotional resonance is, in my opinion, the most important ingredient.
There is no time for explanations in flash. The reader is invited to enter the story at the
character’s peak of vulnerability and then experience and interpret the story in their own
way. Sometimes readers come up with very different interpretations than I intended and
they are all absolutely valid.

You have to be a brutal editor. If you’re one to fall in love with your words, this genre
isn’t for you. Because of the length limitations, sentences have to do double duty. The
use of sensory detail is paramount because our brains are wired to respond emotionally
to sensory input. I would liken the skills needed to those of a master of bonsai.

Do you see flash fiction as an end in itself, or a journey to something else?...

Absolutely an end to itself, although I will say that writing flash has made me a better
writer in every other form, including memoir and essay pieces. But yes, for me, flash is
its own specific world. It’s popularity has exploded in recent years and I believe that is
largely due to how we’re becoming used to receiving information in bite-size pieces
digitally, and also because (and especially right now) people are stressed and may be
finding it hard to focus on longer works. I probably have five novels that I’ve started and
abandoned. With the stories in “Tender Cuts,” a reader can have a complete and
satisfying reading experience in a less than three minutes.

My particular favourite pieces in Tender Cuts were those about Julie-Sue, the child
beauty queen, and I found it interesting that she seems to be the only character you
came back to more than once in this book (I named this The Ballad of Julie-Sue!).
What about this character struck such a chord with you?...

Originally, the title story “Tender Cuts,” was the only one featuring the Julie-Sue
character. When I was putting together the collection, I realized that it needed a
structure or “spine,” and so I wrote the other three stories featuring that character:
“Making the Cut,” “Prime Cut,” and “Final Cut,” the last story, which is told by Julie-Sue’s
grown daughter after her death. I was struck by the idea of a parent, in this case Julie-
Sue’s mother, living out her own dreams through the exploitation of her daughter and
how that affected Julie-Sue as she grew older. Then the other stories were ordered in
groupings of age as Julie-Sue ages.

Are you tempted to pick up any of your stories and develop them into longer pieces,
such as short stories, novellas or even full novels?...

I’m very tempted, and actually thinking about that now. If I do, it would be in the form of
connected flash stories or a novella-in-flash. Right now the challenge is to write stories
that are relevant in our chaotic and rapidly changing world. Flash can address that, but
to write a novel that might not find readers for four or five years – that’s a lot more iffy.

Do you have any words of wisdom for fellow aspiring authors?...

The writers who find success aren’t always the best or most talented. They’re the ones
who never gave up. Don’t take rejections personally. I know that seems difficult, but the
response to your work is entirely subjective. No two people look at a painting or respond
to a story in the same way. I’ve had stories rejected multiple times that eventually found
publication. It’s the nature of the business, so develop a thick skin or you will just make
yourself miserable.

Finally, author Jennifer Egan once said, “Read at the level that you want to write,” which
is the best writing advice I’ve ever gotten.

For articles I’ve written on the craft of writing flash, visit my blog at www.jaynemartin-
writer.com

Thank you so much to Jayne Martin for sharing her thoughts. I am sure you have found Jayne's answers as fascinating as I have and if you are looking for a glimpse into the world of flash fiction, I can wholeheartedly recommend Tender Cuts as a very interesting place to start!

Thank you to Jayne Martin for kindly sending me a copy of this book, in return for an honest review.
Tender Cuts is available to by now from your favourite book retailer, of via the links below:


If Joy Williams and Raymond Carver had a love child that was often left in the care of Lydia Davis it might grow up to be Jayne Martin. Martin’s writing evokes the literary DNA of those who have influenced her most, while in a style and voice that is uniquely her own.

In these 38 tiny tales, everyday people do their best to manage the wounds life inflicts on all of us: A six-year-old beauty pageant contestant strives to please her demanding mother; a woman marries a 1985 Buick LeSabre; in a laundromat bored wives fall under the romantic spell of a lobster; a grown woman is still being fat-shamed by her deceased mother via a Ouija board; a widow carries her husband’s ashes around in Baggies.

With pathos and humor, these and all of the characters in this collection will speak to the reader’s own wounded heart.

Jayne Martin is a Pushcart, Best Small Fictions, Best Microfictions nominee, and a recipient of Vestal Review’s VERA award. Work in New Flash Fiction Review, Spelk, Crack the Spine, Midwestern Gothic, Barren, MoonPark Review, Blink-Ink, and Bending Genres among others. She is also the author of Suitable for Giving: A Collection of Wit with a Side of Wry, a collection of humor essays. Her TV-movie writing credits include Big Spender for Animal Planet, and A Child Too Many, Cradle of Conspiracy, and Deceived by Trust for Lifetime. She lives in California, where she rides horses and drinks copious amounts of fine wines, though not at the same time.