Without A Trace (A DCI Kate Daniels Book) by Mari Hannah 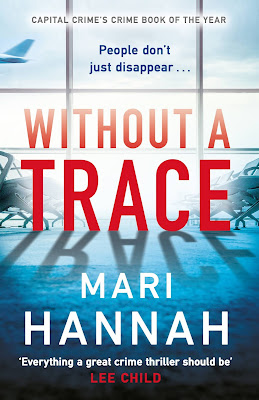 Without A Trace by Mari Hannah.

A plane on route from London to New York City has disappeared out of the sky. This breaking news dominates every TV channel, every social media platform, and every waking hour of the Metropolitan Police and US Homeland Security.

The love of DCI Kate Daniels' life was on that aircraft, but she has no authority to investigate. This major disaster is outside of her jurisdiction and she's ordered to walk away.

A SEARCH FOR THE TRUTH

But Kate can't let it lie. She has to find out what happened to that plane - even if it means going off book. No one is safe.

And there are some very dangerous people watching her...
******************************************
Without A Trace is my first Mari Hannah, but it will most certainly not be my last.
This book is somewhat of a genre-busting crime story that starts off with a bang in international thriller country with a major air disaster, and then unexpectedly leads you down a tense and twisty path towards a gripping domestic police procedural - accompanied by more than a little emotional drama along the way.
Despite not having read any of the Kate Daniels books before, this clever and suspenseful crime novel carried me along right from page one and I was able to pick up enough of the history between the characters for the story to play out brilliantly right from the get go. The characters are beautifully drawn, each one having their own important part to play in the intricate plot, from the lowliest of the walk-on part extras all the way up to the star performers.  Kate Daniels in particular is written with such heart and soul that she immediately got under my skin, and although she has flaws enough, her grit and determination to get to the bottom of this intelligent mystery whatever the personal cost had me rapidly turning the pages, lapping up every menacing twist and delicious turn.
This is a first class thriller - exciting and perfectly paced. I read this one in a single sitting, unable to put it down once I had begun, which is very impressive for a book that is some way on in an established series. It works great as a standalone, but having said that I enjoyed it so much that I will definitely be going back to the beginning of this series to get to know every little detail about the characters and fill out their backstories as soon as I can. Mari Hannah, you have got yourself a new fan!
Without A Trace is available to pre-order from your favourite book retailer now, or from Bookshop.org HERE.
Thank you to Alainna Hadjigeorgiou at Orion for sending me a copy of this book in return for an honest review and for inviting me to be part of this blog tour.
About the author:
Multi-award winning Mari Hannah is the author of the Stone & Oliver crime series, the Ryan & O'Neil series and the DCI Kate Daniels series.

In July 2010, she won a Northern Writers' Award for Settled Blood. In 2013, she won the Polari First Book Prize for her debut, The Murder Wall. She was awarded the CWA Dagger in the Library 2017 as the author of the most enjoyed collection of work in libraries. In 2019, she was awarded DIVA Wordsmith of the Year. In that same year, Mari was Programming Chair of the Theakston Old Peculier Crime Festival.

She lives in Northumberland with her partner, a former murder detective.
Follow Mari on Twitter at @mariwriter 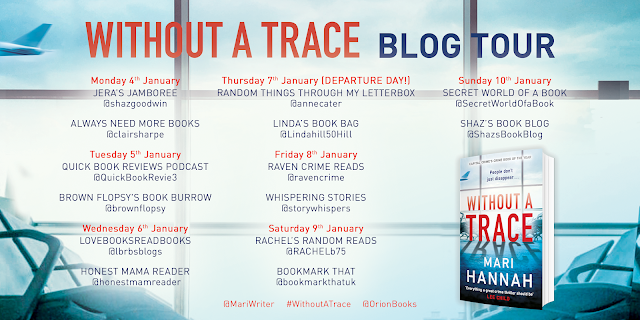 I am happy to accept review copies from publishers & authors - inc. audio books. I prefer e-books in the mobi format for Kindle. I do blog tours, with sufficient notice.
Please feel free to contact me with review requests via the contact widget below and I will get back to you if I am interested.

I am an affiliate of Bookshop.org If you buy using my link to their site, I do receive a small commission from each sale.

The Shape Of Darkness by Laura Purcell

The Shape Of Darkness by Laura Purcell. Published 21st January 2021 by Raven Books. From the cover of the book: As the age of the photogr... 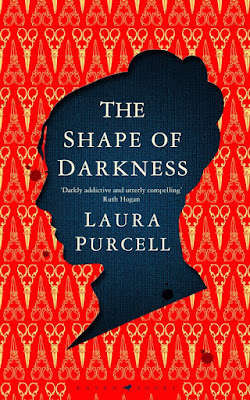