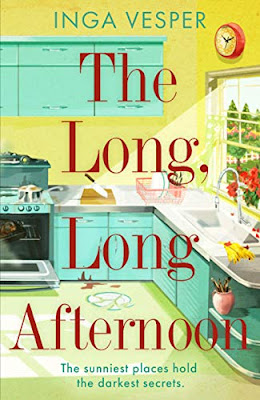 It's the summer of 1959, and the well-trimmed lawns of Sunnylakes wilt under the California sun.

At some point during the long, long afternoon Joyce Haney, a seemingly happy housewife and mother, vanishes from her home, leaving behind only two terrified young children and a bloodstain on the kitchen floor.
While the Haney's neighbours get busy organising search parties, it is Ruby Wright, the family's 'help', who may hold the key to this unsettling mystery. Ruby knows more about the secrets behind Sunnylakes' starched curtains than anyone, and it isn't long before the detective in charge of the case wants her help. But what might it cost her to get involved?
In these long hot summer afternoons, simmering with lies, mistrust and prejudice, it could only take one spark for this whole 'perfect' world to set alight . . .

A beguiling, deeply atmospheric debut novel from the cracked heart of the American Dream, The Long, Long Afternoon is at once a page-turning mystery and an intoxicating vision of the ways in which women everywhere are diminished, silenced and ultimately under-estimated.
**************************************
1959: Welcome to Sunnylakes, Santa Monica, a picture perfect, white middle-class neighbourhood, filled with pretty houses behind white picket fences, where happy smiling housewives care for their shiny-faced children and strong, manly husbands - the epitome of the American Dream. But appearances can be deceptive.
Under the stifling heat of the California sun, something is rotten at the heart of Sunnylakes and this hidden darkness is about to be exposed by the disappearance of one Joyce Hanley - a seemingly happy wife and mother, who vanishes from her home one afternoon, leaving behind two distressed children... and a bloodstain on the kitchen floor. Where did she go, and why?
The story plays out in, after the event, third person perspectives from Ruby, the young black 'help', and Mike, the police detective investigating the mysterious disappearance - and also in the first person, from Joyce herself. These three accounts, when combined, will take you to some deep and thought provoking places.
Joyce's narrative is where we start. Her voice hooks you from the very beginning, and Inga Vesper quite brilliantly breaks up the flow of the story, which primarily runs back and forth between Ruby and Mike, with interjecting chapters that come to show us the truth behind her life - and her account contrasts quite starkly with the picture of the woman we hear from family, friends and neighbours after her disappearance.
The smart, feisty Ruby brings a different perspective on life behind the scenes in Sunnylakes, exposing many of the dark little secrets that lie beneath the brittle surface of respectability, although she is loathe to share what she knows with the police for fear of getting embroiled in a situation that could backfire on her - after all, this is a world where ingrained racism is still rife, even though segregation has been abolished, and the black person in the room will always be seen as the guilty party. She also shows us the reality of the other side of the tracks for the poor back and Latino families living in the city.
Mike has relocated to Santa Monica under a cloud and is desperate to prove himself. His fish-out-of-water situation hampers his progress both within the police department, and within the environs of Sunnylakes - especially amongst its female contingent - but it also brings him an outsider's perspective. Interestingly, it is this perspective that allows him to connect with Ruby, and their combined efforts are key in solving the mystery of Joyce's disappearance - and I loved the way they worked together!
There are myriad themes running through the piece, all tied up in a story that not only sucks you into the taut and oppressive atmosphere of 1950s suburbia, but also shines a light on the burgeoning civil and women's rights movements. There are moments when you will laugh out loud, often at the absurdity of the idealised picture of 1950s feminine perfection that will have you thinking of the Stepford wives, but also be prepared to experience indignant rage and heart-rending sadness too - and I promise you that the thrilling conclusion will have you sitting on the very edge of your seat in tense excitement.
This is a beautifully written, compelling and emotive story, with a gripping mystery at its heart, and as an examination of the false icon of the 'American Dream' it is most impressive for a debut.
The Long, Long Afternoon is available to buy now from your favourite book retailer or from Bookshop.org HERE.
Thank you to Inga Vesper and Manilla Press for sending me a proof copy of this book in return for an honest review and to Tracy Fenton of Compulsive Readers for inviting me to be part of this blog tour.
About the author:
Inga Vesper is a journalist and editor. She moved to the UK from Germany to work as a carer, before the urge to write and explore brought her to journalism. As a reporter, she covered the coroner's court and was able to observe how family, neighbours and police react to a suspicious death.
Inga has worked and lived in Syria and Tanzania, but always returned to London, because there's no better place to find a good story than the top deck of a bus. 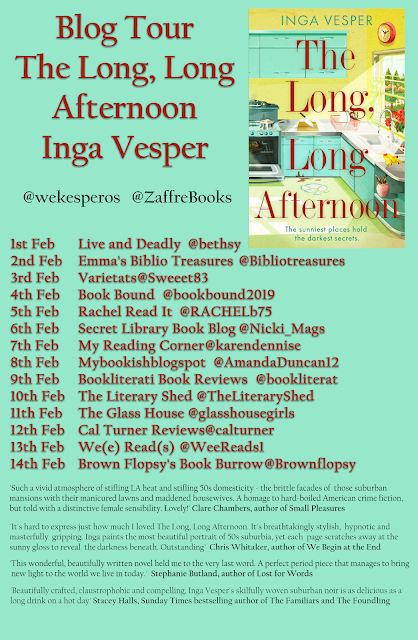