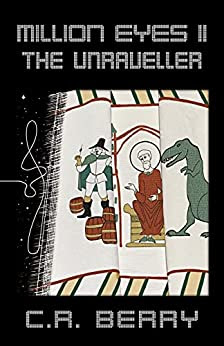 Time is the Ultimate Saviour...

Following an impossible discovery in East London, archaeologist Dr Samantha Lester joins forces with software developer Adam Bryant to investigate the events that led to the disappearance of his best friend, Jennifer, and to bring down the people responsible - Million Eyes.

Before long, Lester and Adam are drawn into a tangled conspiratorial web involving dinosaurs, the Gunpowder Plot, Jesus, the Bermuda Triangle, and a mysterious history-hopping individual called the Unraveller, who is determined to wipe Million Eyes off the temporal map.

But as the secrets of Million Eyes' past are revealed, picking a side in this fight might not be so easy.
**********************
I really enjoyed the first book in this series, Million Eyes, when I read it last year and couldn't wait to see what C.R. Berry had in store for me in this second instalment, Million Eyes II: The Unraveller.
Linking nicely to what has gone before, Berry starts by weaving two storylines together - that of archaeologist Dr Samantha Lester, who finds an impossible discovery in East London; and Million Eyes' software developer Adam Bryant, an old friend of Jennifer who readers will remember went missing while trying to get to the truth about the secretive company in book one.
When Samantha and Adam join forces to try to bring down the huge, murky corporation Million Eyes, they find themselves embroiled in not just a quest for justice, but also caught up in a weird race between Million Eyes and someone called the Unraveller to track down the whereabouts of some ancient scrolls that could rock the foundation of western religion. What is so vital about these scrolls that Million Eyes will do anything to ensure they don't fall into the wrong hands? And why does the mysterious Unraveller want to see them destroyed?
Welcome to another madcap romp through time! C.R. Berry makes a brilliant job once more of looking at events from history in whole new, and darkly comic way, weaving them beautifully into an adventure that will appeal to lovers of both time travel and conspiracy novels, and Berry is even more ambitious in the scope of the events that he puts down to the intervention of interfering time travellers than ever before in this second adventure.
At the root of the twisty shenanigans, we have Jesus as you have never seen him, who writes some troublesome jottings that cause no end of mayhem in the years that follow. As the consequences of what he has to confess ripple through time, Million Eyes has its work cut out to prevent the contents from getting out, bringing in many lovely episodes through multiple time periods and with some familiar faces from book one. Cue some very quirky theories on subjects as diverse as the foundation of the Christian church, the events of the Gunpowder Plot, the parentage of Iceni queen Boudica, and even the demise of the dinosaurs - and the introduction of the mysterious Unraveller, whose intentions are far from clear.
This book is much more complicated than the first one, which I think is inevitable in a second book in a trilogy, with its necessity to incorporate what has gone before and set everything up for the concluding novel, but Berry handles the myriad threads rather well. However, I would add that, even though there is a handy recap of the events from book one at the beginning, you really do have to have read the previous book to make any sense of what is going on in these pages - and honestly, why wouldn't you, because it's great! Admittedly, I am not entirely sure I know myself, because so much goes on in these pages, and there are a lot of characters in the mix - and the story tips completely on its head before you reach the end, with an intriguing glimpse into the history of Million Eyes itself that makes you question everything you thought you knew. Very clever, Mr Berry! I am undecided about the usefulness of the scattered sex scenes, which are a little cringeworthy, but even these weirdly fit with the quirky style of the book, and as it happens at least one of these did lead to events that made me chuckle.
This is such a fun series, full of surprises, humour and everything a fan of time travel adventures craves, with a big dose of original conspiracy plots that are highly entertaining. I am really looking forward to where Berry goes with this in book three as there some delicious possibilities ahead that could be very exciting on the sci-fi front indeed.
Million Eyes II; The Unraveller is available to buy now in ebook format, with the paperback coming in November 2021.
Thank you to Elsewhen Press, C.R. Berry and Mark Iles for sending me an ecopy of this book in return for an honest review, and for nviting me to be part of this blog tour.
About the author:
C.R. Berry started out in police stations and courtrooms - ahem, as a lawyer, not a defendant - before taking up writing full-time. He's currently head of content for a software developer and writes fiction about conspiracies and time travel. (Note: he's not a tin foil hat wearer, doesn't believe 9/11 was an inside job, and thinks that anyone who believes the Earth is flat or the Royal Family are alien lizards needs to have their heads examined.)
Berry was published in Best of British Science Fiction 2020 from Newcon Press with a Million Eyes short story. He's also been published in magazines and anthologies such as Storgy and Dark Tales, and in 2018 was shortlisted in the Grindstone Literary International Novel Competition.
In 2021, he bought his first house with his girlfriend, Katherine, in Clanfield, Hampshire, discovering whole new levels of stress renovating it (not helped by a rogue builder running off with most of their budget). The couple are now in the fun stage, going full-on nerd and theming all the rooms - their bedroom is a spaceship, their kitchen a 50s diner. Now that the dust is settling,
Berry is refocusing on the final book in the Million Eyes trilogy and getting back to writing his first collaborative novel with Katherine: a space-set adventure with aliens, terrorists, a mysterious wall that surrounds the universe and - of course - conspiracies.
Find out more about C'R. Berry HERE.