My Mother Next Door (Audio Book) by Diane Danvers Simmons 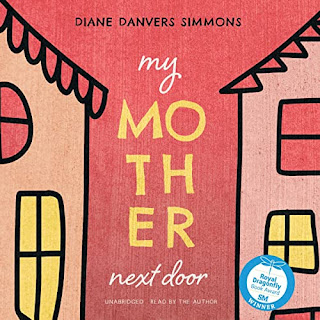 My Mother Next Door by Diane Danvers Simmons.

It’s hardly newsworthy when a man walks out on his family. But it’s rather unusual for a mother to walk out, leaving the father to bring up their sixteen-year-old daughter—and downright scandalous for said Irish Catholic mother to move into the house next door to start a new life with a bunch of hot male students at the age of sixty.

No one can accuse Diane Danvers Simmons of telling a familiar story. Instead she offers a wickedly witty, candid, irreverent British coming-of-age story with a fresh take on maternal abandonment. In My Mother Next Door she shares the life lessons learned growing up in the revolutionary 1970s while her narcissistic mother charted her own unfathomable course to independence and freedom.

After living in America for decades and becoming a mother herself, Diane journeys back through the madness of her early years, coming to terms with a comical, painful family history, but also celebrating the strength and humor it has given her to face the absurdity of life. In trying to understand what drove her mother to become the woman next door, Diane discovers new respect, love, and even forgiveness: the root of our humanity.
***********
When Diane Danvers Simmons was sixteen, her life took a dramatic turn. Her feisty 60 year old, Irish-Catholic mother decided it was time to up and leave her husband and daughter, and move into the house next door to live with the group of young male students she rented it to. Diane's family circumstances had always been on the bumpy side, coming as she did from a blended family that regularly felt the wrath of her mother's resentful temper, but this was on all new level of unconventional living - especially for the 1970s.
When Diane was grown, with children of her own, she realised that the only way to make sense of the years of trauma that affected her after her mother's abandonment was to try to find a way to forgive her, and this book is the result.
Part coming of age tale, and part exercise to make sense of her mother's behaviour with the hindsight she has now gained, this is a candid, painful, and often funny account of her family's history. In researching it, she spoke to friends and family to get a picture of the things that had shaped her mother into the difficult woman she knew, and this helped her to gain insight on the past in a way that was not apparent to her as a teenager. The moments when she recounts what she learned about the hardship that her mother experienced during her childhood in Ireland, and the terrible losses inflicted on her during her first marriage are heartbreaking, and they offer a fascinating glimpse of the social history of the times too.
As a cathartic literary exercise this book has helped Diane to reconcile many of the things that puzzled her about the cold-hearted selfishness that she has always believed her mother showed towards her. As Diane flips back and forth beteeen the past and what she now understands about her mother's life, it is clear that she thinks very differently about her mother's actions, and appreciates the lessons she was trying to teach her about being independent and following her dreams. Some of the leaps Diane makes in her wish to forgive her mother's behaviour, especially the divisive and narcissistic elements of her personality, do require a bit of a stretch to accept. However, there is a lot of sense in the notion that finding a way to cast off bitterness is a good thing if you want to move forward.
The book is narrated by Diane herself, which I really enjoyed. You can feel the emotion running through her words, and her sense of humour comes through well. There is always much more intimacy and feeling in a story of this kind when the author takes you through the events of their life. I found many of her references to the popular culture of her youth very nostalgic too. I did feel that the story gets a little bogged down in the repetitive 'he said, she saids' during the middle part of the book though, and the overall story would have flowed better if some of the blow-by-blow shouting matches had been described in less detail.
This was a very interesting listen. It is always enlightening to delve into the complicated family history of others, and I think that in these modern times it is not easy to convey quite how much Diane's family circumstances were unusual for the time. I applaud her ability to take the positives from her journey and leave the negatives behind.
My Mother Next Door is available to buy now in multiple formats.
Thank you to Rachel Hutchings at Books Forward for offering me the chance to listen to this audio book, in return for an honest review.
About the author:
Diane Danvers Simmons is a born-and-raised Brit who moved to America in her late twenties for business and success. After an accomplished career as a senior vice president at Saatchi & Saatchi Advertising and then Omnicom Media in London, New York, and LA, she became a mother. Drawing from her advertising and marketing skills, Chopra center teachings, and life experiences, Diane transitioned her skills into female-empowerment activism through speaking engagements, workshops, writing (published online articles), film, online communities, and mentorship in the USA and globally. Embarking on a personal journey to write My Mother Next Door, she was further inspired to create and host a new podcast series with her millennial daughter called Mothers and Daughters Unfiltered (the title says it all), launched Jan 2020, at www.mothersanddaughtersunfiltered.com.