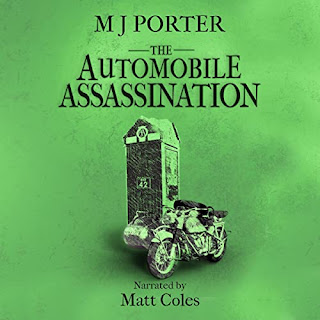 As events in Europe begin to turn in favour of the Allies, Chief Inspector Mason of Erdington Police Station is once more prevailed upon to solve a seemingly impossible case.

Called to the local mortuary where a man’s body lies, shockingly bent double and lacking any form of identification, Mason and O’Rourke find themselves at the Castle Bromwich aerodrome, seeking answers that seem out of reach to them. The men and women of the Royal Air Force stationed there are their prime suspects. Or are they? Was the man a spy, killed on the orders of some higher authority, or is the place his body was found irrelevant? And why do none of the men and women at the aerodrome recognize the dead man?

Mason, fearing a repeat of the cold case that dogged his career for two decades and that he’s only just solved, is determined to do all he can to uncover the identity of the dead man and to find out why he was killed and abandoned in such a bizarre way, even as Smythe demands he spend his time solving the counterfeiting case that is leaving local shopkeepers out of pocket.

Join Mason and O’Rourke as they once more attempt to solve the impossible in 1940s Erdington.
***********
When Chief Inspector of Mason of Erdington Police Station is called into get to the bottom of an unusual case involving a body that has been discovered naked, and bizarrely bent double, in the woods on a local RAF base, he has no idea how he is going to make any headway in the case. Although the man has clearly been murdered, his lack of papers, and the fact that no one at the base recognises him, does not give Mason much to go on, and this seems doomed to become another dead-end investigation.
However, in the company of the intrepid Sergeant Clara O'Rourke, who proved to be a very valuable partner-in-solving-crime in their previous adventure together, Mason begins to see a way forward - and it somehow relates to the odd goings in with the local branch of the Automobile Association. Can Mason and O'Rourke solve this seemingly impossible case against the backdrop WWII England?
This is my first adventure with Mason and Rourke, following their debut outing in the deliciously named The Custard Corpses, and it works well as a stand-alone mystery. The greater part of the story is taken up with Mason and O'Rourke going on rambles through the suburbs of Birmingham in pursuit of clues to identify the dastardly criminals behind the very unusual murder. Along the way Porter cleverly contrives to bring in lots of lovely historical detail about the situation on the home front in 1944, when things appear to be going very well for the Allies in Europe but the grinding years of shortages are taking their toll. As the investigation develops, Mason and O'Rourke discover that this case has far more reaching consequences than they thought, with links to counterfeiting and some very shady characters.
I really enjoyed the relationship between Mason and O'Rourke, especially the mutual respect they show each other and the way they work so well to thrash out the significance of every little clue they discover. The story twists and turns nicely, and although there is violence involved, this is actually much more of a gentle and cosy mystery than I was expecting, which made it right up my AA patrolled street. And while we are in the matter of the AA, there is such a lot about the history of the Automobile Association packed into this tale and it was rather fascinating. Who knew?
The narration by Matt Coles was delightful to listen to, and he handles all the characters with ease - especially the local accents and turns of phrases. He keeps the pace going well, from start to finish, and through all the little surprises that crop up in between.
This is just the kind of story that appeals to lovers of quirky and nostalgic crime stories. It is easy to listen to, full of fun characters, and keeps you guessing, all of which make for a charming audio experience. Highly enjoyable - with a cracking bit of word play in the title!
The Automobile Assassination is available to buy now in hardcover, paperback, ebook and audio formats.
Thank you to M.J. Porter for granting me copy of this audio book in return for an honest review, and to Rachel's Random Resources for inviting me to be part of this Book Birthday Blitz.
About the author:
MJ Porter is the author of many historical novels set predominantly in Seventh to Eleventh-Century England, as well as three twentieth-century mysteries. Raised in the shadow of a building that was believed to house the bones of long-dead Kings of Mercia, meant that the author's writing destiny was set.