How Pale The Winter Has Made Us by Adam Scovell 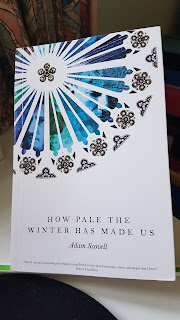 How Pale The Winter Has Made Us by Adam Scovell.
Published 13th February 2020 by Influx Press.
Read March 2020.

Just after her partner has left to study in South America, Isabelle receives the news that her artist father has committed suicide by hanging himself in Crystal Palace Park.

Rather than returning home to deal with the aftermath of her father's death, and the demands of her harridan mother, she decides to stay in Strasbourg for the winter, alone in her partner's flat.

But, the death of her father, a man she hated, has affected Isabelle in most unexpected ways and she becomes obsessed with researching Strasbourg's history and the links between some of its famous inhabitants.

She is also becomes convinced that she has become prey to a supernatural spirit called the Erl-King, who is using her for his own pleasures and sapping her inner strength.

As Isabelle becomes more and more disconnected from those who were formerly close to her, her grip on reality starts to slip. Something within her seems to have died along with her her father and the ghosts of the past are becoming more important than her own future. Can she break free from this dangerous melancholy?

There is no doubt that How Pale The Winter Has Made Us is a weird, but wonderful, book. The writing is simply gorgeous and it is one of those books where the silky prose glides off the page. The cover of this book is also absolutely beautiful, if you like that sort of thing - which I unashamedly do!

Part travelogue through the history of Strasbourg and part account of one woman's descent into madness sparked by grief, it is strangely compulsive reading. It becomes clear that the suicide of Isabelle's father has deeply affected her, although she purports to have hated him, and has brought to a head her feelings about her relationships with both of her parents and her partner, and something within her has fractured as a result.

Dark shadows begin to lurk at the periphery of her vision - sometimes accompanied by the conviction that she can see her father's legs dangling, as they must have done from the tree in Crystal Palace where he chose to end his days - shadows that she comes to attribute to the presence of the Erl-King, a demon king who she learns of from her research into local folklore and the poetry of Goethe.

As her obsession with researching the history of Strasbourg takes over her life, so does her belief that the Erl-King has chosen her as his latest victim, even to the extent of believing that he visits her at night to use her body for his wanton pleasures - a body that is wasting away as she loses her grip on real life.

The format of the book emphasises the disconnect Isabelle feels from her surroundings rather well, as her account of the winter is broken up by long passages of detailed histories of the characters and places connected to her research. I must admit that while the majority of this research is completely fascinating, I did think that there was maybe a little too much, as I was desperate to get back to Isabelle's own story and found these interludes a bit distracting as the book went on. But there is no doubt that I learned lots about Strasbourg and some of its famous residents along the way, which sent me off on my own tangents to search out more information on good old Google, so I suppose it serves its own purpose of highlighting how we can all get caught up in strange time bubbles that drag us away from the real world.

As someone who played in Crystal Palace Park when I was young, I must admit that Isabelle's link with my childhood playground gave me pause for thought. A man hanging himself among the dinosaurs is certainly something to picture, and perhaps a connection I would prefer to forget - and yet there is something so bizarre about it happening in a place that I have so many happy memories of that it becomes darkly ironic rather than macabre. So thankfully, you haven't spoiled it for me Mr Scovell - although, if I ever go back there, perhaps I will find myself looking a bit warily at the trees?

This is one of those books that I will be musing about for some time to come and pondering over what happens to Isabelle after I have left her in Strasbourg at the end of the winter. I have my own thoughts on where she goes next, but will keep them to myself, so you will have to read this one to make up your own mind.

I highly recommend this strange and absorbing book, if you like a quirky read.

Thank you to Influx Press, Adam Scovell and Turnaround Publisher Services for providing me with a copy of this book in return for an honest review.


Isabelle is alone in Strasbourg. The day after her partner leaves to travel abroad, she receives news of her father's suicide, his body found hanging in a park back home in Crystal Palace. Isabelle misses her flight back to London and a new university job, opting to stay in her partner's empty flat over the winter.

Obsessed with the many strange coincidences in Strasbourg's turbulent history, Isabelle seeks to slowly dissolve into the past, succumbing to visions and dreams as she develops her meticulous research about the city. Stalked by the unnerving spirit of the Erl-King she fears something else has died along with her father; the spectres of Europe communicating a hidden truth beneath the melancholy.

How Pale the Winter Has Made Us rummages through the crumbling ruins of a life, building cartographies of place and death under a darkening sky.

Adam Scovell is a writer and filmmaker from Merseyside now based in London.

His writing has featured in The Times, BFI, Little White Lies and The Quietus.
He runs the website, Celluloid Wicker Man, and his film work has been screened at a variety of festivals and events.
In 2015, he worked with Robert Macfarlane on an adaptation of his Sunday Times best-seller, Holloway, and has worked on films alongside Stanley Donwood, Iain Sinclair and BAFTA-nominated director, Paul Wright.
His first novel, Mothlight, was published by Influx Press in 2019.