What Remains At The End by Alexandra Ford 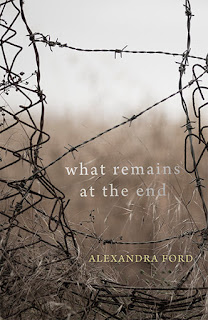 What Remains At The End by Alexandra Ford.
Published 30th October 2019 by Seren.
Read February 2019.

The time has come for Marie Kohler to admit defeat and acknowledge that her marriage has been over for some time. She has met a mysterious man, called David, who promises the chance of a new romance.

The death of Marie's beloved grandfather and her grandmother's Alzheimers are adding to her feelings of being untethered somehow, and are feeding a need to explore her roots via the history of her grandparents' flight from Yugoslavia to America, following the end of World War II.

Marie is shocked by what she discovers - her grandparents were caught up in the hidden genocide of the indiginous ethnic Germans of Yugoslavia, by Tito - and she had no idea about their tragic history, eventhough they raised her from birth.

When David offers to take Marie on a journey to her grandparents' former homeland, she jumps at the chance and is overwhelmed by his generosity. But the journey is harder than both Marie and David thought and the emotions that are thrown up by the things they discover create some difficult moments between the fledgling lovers.

Alternating between Marie's journey in 2012 and the horrific events of the past, What Remains At The End explores the human toll of what happens when we search for the truth among the terrible secrets of the past.

I was blown away by the power of this book - it certainly packs an emotional punch.

The story weaves back and forth between Marie's journey,  and her musings on her relationship with her beloved grandparents, the failure of her marriage, the beginnings of her new relationship with David, and the terrible events of the past (mostly just after the war, but also with an intriguing glimpse around the time of Tito's death) - so the present (2012) is interspersed with the experiences of Tito's victims.

I was aware of the name Tito, somewhere in the back of my mind, but I knew next to nothing about the man that went on to become the dictator that held sway over Yugoslavia for so many years, until his death in 1980. I most certainly had not heard at all about the ethnic Germans who were forced out of Yugoslavia in the aftermath of WWII - not to mention, the forced labour camps and downright extermination meted out to these people. This was a revelation, albeit an uncomfortable and shocking one. Interestingly, it seems this episode in history remains as one which is hidden from sight, like a dirty secret. 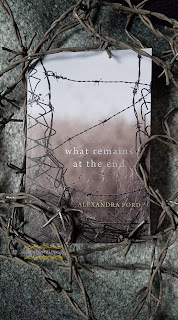 This book is best described as haunting. It is true to say that this is not a book with any sense of light relief in its pages, and it is quite a serious read as a result, but it has a very important message. The weight of the past and hidden secrets hang heavy and Alexandra Ford uses this beautifully against the ups and downs of both a marriage that has failed and the new shoots of a burgeoning romance - and the feeling of oppression is echoed in the atmosphere of the places Marie and David visit on their journey, where great efforts have been made to keep the truth hidden from sight.

What Remains At The End is a very impressive and powerful debut indeed and a book that I will be thinking about for a long time to come.

Thank you to Alexandra Ford and Seren Books for providing me with a copy of this book in return for an honest review, and to Kelly Lacy of Love Books Tours for inviting me to be part of this tour.

What Remains At The End is available now from your favourite book retailer, or via this link on Amazon UK.

In the aftermath of World War II, hundreds of thousands of Yugoslavia's ethnic Germans, the Danube Swabians, were expelled by Tito's Partisan regime. A further sixty thousand were killed.


Seventy years later, Marie Kohler's marriage is falling apart. She's seeing someone new, an enigmatic man named David, who takes her to the former Yugoslavia to find the truth behind her grandparent's flight to America.

Alternating between the late 1940s and contemporary Serbia, Marie's story is interwoven with those of Tito's victims - a young survivor who has lost his mother and his identity, a woman held captive in a sugar factory, a refugee girl living in Austria under the din of air raid sirens. Marie's journey follows the Danube in search of connection in the face of loss. Connection to the lost souls, to the memory of her grandfather, to the man beside her, to her grandmother suffering Alzheimer's back home.

What Remains at the End considers what happens when the truth goes unspoken, and asks how it can be recovered, if there is anything left to recover, in the face of so many secrets. Alexandra Ford has written an intriguing debut novel of personal relationships played out against some of the very worst results of realpolitik, where human life is subjugated to political and national ideology. 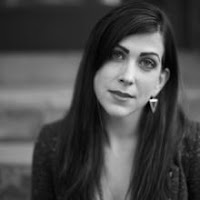 Alexandra Ford was born near Philadelphia. She earned her MFA from Sarah Lawrence College and her BA from Virginia Tech.

Her writing appears in The Rumpus and No Tokens Journal, among others.

She lives on a smallholding on the border between England and Wales. Her first novel What Remains At The End is available now.