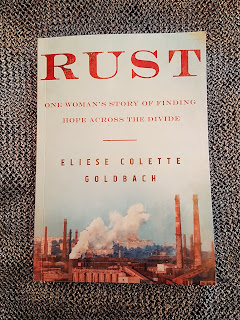 From a very young age, Eliese Goldbach was convinced that her calling was to become a nun. Raised as a devout Catholic, in a staunch Republican household, Eliese saw this is the perfect way to help those less fortunate than herself.

But, twenty years later, horribly disillusioned and having lost all direction, Eliese instead found herself working in a Cleveland steel mill - during the 2016 election campaign.

How did she get here and what was happening to her country, if a man like Donald Trump was a serious contender for becoming the President of the United States of America?

Rust is part memoir, part examination of the times Eliese found herself in - a look at the way her attitudes have changed over the years, as a product of her experiences in childhood, at college and as a young woman. She no longer fits the mould her parents cast for her, but instead has learnt that understanding is the key to bridging the divide that splits her country in two.

For me, Rust is the perfect memoir - one which is a very personal account of a life which has taken an unexpected turn, and one which is also able to teach me about something I knew nothing about before.

This story of a college girl who found herself a steel worker is both a fascinating and compelling and one which had me engrossed from page one. The detailed account of the workings of the steel mill was interesting enough in itself, especially as that of a woman in a man's world, but when you add to this the glimpse into the lives of Eliese's fellow workmates this book becomes so much more. It is so easy to see the workers of the Rust Belt as a bunch of sexist, Republican supporting, beer swilling types, but Eliese serves to show that they are in fact, made up of a wide range of individuals with very different experiences, beliefs and desires - and although mainly men, there are more woman working this job than I realised.

Eliese is very frank and honest about her own experiences in these pages, from her very youngest childhood years as a devout Catholic who yearns to serve God, through to the fracturing of her mental health as a result of rape during her college years, and her struggles to maintain a steady job and relationship as an adult. The sadness she felt as all her childhood dreams came crashing down is heartbreaking and I could not but feel very angry at the way she was treated by the very people who should have been protecting her - at times, even towards her own parents, whose logic often defies understanding. But the change in the course of her life that resulted has helped her to find other, surprising ways to express herself.

Throughout it all, the election campaign which brought Donald Trump to power is playing out in the background. From a Republican upbringing, Eliese has now settled on a left-of-centre position and it was both eye-opening and more than a little worrying to read about her conversations with her own parents, as she confronted them about the reality of Trump's poisonous message. Whilst the irony of Trumps arguments shines through, it is in fact easy to see how he was eventually victorious against all the odds - when you are convinced that the opposition is evil, it becomes oh too simple to accept an alternative that is far from perfect.

Yet, through all that life has thrown at her, Eliese still radiates a message of hope in this book. Her personal message is one of finding understanding where she was taught to believe there was only a desire to undermine the sanctity of the American Dream. She can acknowledge that although she does not see eye to eye with everyone, she understands that their actions are often based on fear - and this does not stop her loving her parents or them loving her back. If she can bridge this divide, perhaps others can too?

Rust is available to buy now from your favourite book retailer.

Thank you to Katya Ellis at Quercus for providing me with a copy of Rust, in return for an honest review.

When Eliese Goldbach was nine years old, she decided to become a Catholic nun. Twenty years later, with a Master's degree, she found herself making steel in the Rust Belt during the 2016 US election season. A small part of her wondered if she'd got stuck inside a dream that had gone horribly wrong. Trump was supposed to be golfing in Florida, not vying for the presidency. She was supposed to be saving souls, not stirring a vat of molten metal. The trajectory of her life had fallen short of expectations. The trajectory of the USA was going haywire.

Part memoir, part social commentary, framed by Eliese's experiences as a steelworker, Rust is about perspective, and shifting perspective: it's about change. Much of Eliese's life connects the identities that seem to be driving the USA apart, and the parallels with a post-Brexit UK are uncanny. She's a former Republican turned Democrat; a feminist with Christian roots. Anti-abortion - until she herself was subjected to sexual violence - a supporter of the right to choose. She doesn't fit neatly into any one box.

Appealing to readers of Hillbilly Elegy and Educated, Rust explores Eliese's transformation from far-right to left-of-centre, detailing her first year as a steelworker, and the path that brought her to the mill in the first place. It is an American tale, but could just as easily be Sunderland, UK, as Cleveland, USA.

Raw and luminous, Rust explores the USA's, and the world's, most pressing issues in an attempt to amplify our understanding of one another across the divide. It's a rally cry to a nation at a crossroads

Eliese Goldbach is a steelworker at the ArcelorMittal Cleveland Temper Mill. She received an MFA in nonfiction from the Northeast Ohio Master of Fine Arts Program. Her writing has appeared in Ploughshares, Western Humanities Review, Alaska Quarterly Review, McSweeney's Internet Tendency, and Best American Essays 2017. She received the Ploughshares Emerging Writer's Award and a Walter Rumsey Marvin Grant from the Ohioana Library Association, which is given to a young Ohio writer of promise. 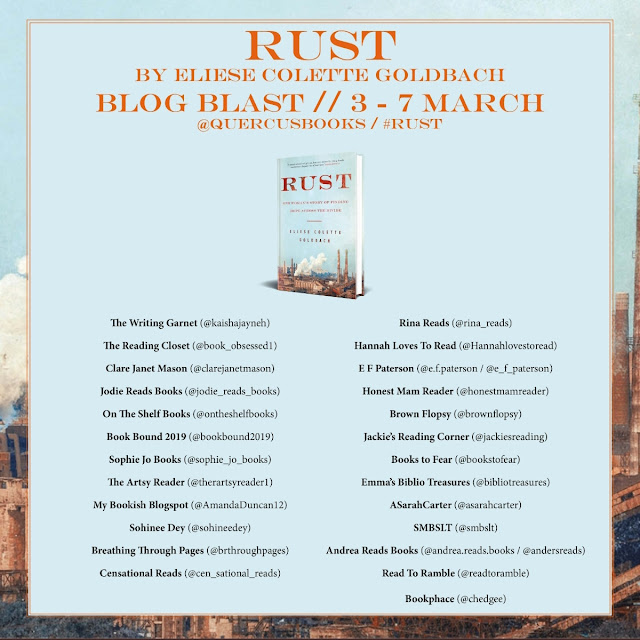